“The totally awakened warrior can freely utilize all elements contained in heaven and earth. The true warrior learns how to correctly perceive the activity of the universe and how to transform martial techniques into vehicles of purity, goodness, and beauty. A warrior’s mind and body must be permeated with enlightened wisdom and deep calm.”
– Morihei Ueshiba

When most people hear the term “WARRIOR” they immediately think of the very literal occupation of warriorship; in other words a soldier in the military or some type of gladiator or combat fighter comes to mind…

As it probably should! 🙂

My father was such a warrior, donning the Red Beret and serving in the United States Air Force as a member of the Combat Control Team. Hooyah!

I remember back into my childhood… it was Christmas time in 1989 and I was only 12 years old. Presents were mounting under the tree, while my brother and I were getting even more excited as it got closer and closer to Christmas day! 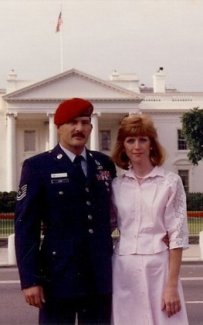 Mom and Dad in DC years ago

One evening (on December 19th I believe) we were alerted to the sound of my dad’s beeper going off. This was way back when your average person didn’t even have a beeper, yet alone dream of owning a cell phone.

It was something we had grown accustomed to, normally for his training drills. He checked in and informed us that he had to leave immediately. He could never tell us why, where he was going or when he would be back. Everything was classified and top secret information.

As it turned out, the very next day, the U.S. invaded Panama under code name “Operation Just Cause” to remove the de facto ruler from power.

It was the first and only Christmas that I remember my father missing.

In the end, we were just glad that he came back to us unscathed and that they captured and arrested the Panamanian Defense Force leader… Manuel Noriega, who was later indicted on eight counts of drug trafficking, racketeering and money laundering.

Here’s a picture of my dad, aboard a MC-130E Combat Talon, flying back to the US with Manuel Noriega in custody on January 3rd 1990. 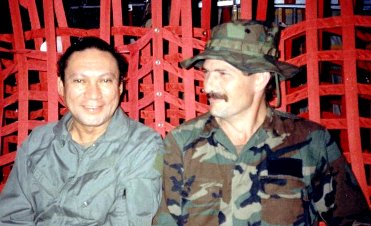 He looks pretty happy for a guy going to prison!

I’m proud of my father for his life-long dedication to his military career, the extreme and hardcore training he endured to become a warrior and part of the CCT, as well as, his many years of service to our great country.

I also honor and respect all of the warriors… past, present and future that find the courage within themselves to stand up and fight for what they believe in.

Now, I don’t necessarily condone war or the unnecessary taking of lives, yet I do believe in self-preservation, defending and protecting your loved ones, and the right to freedom. That said; violence of any kind should always remain a last resort after all other means have been fully exhausted… and even then carried out with respect, compassion and remorse.

Transcending the Art of War

As you know, my brother and I have chosen to call this blog ‘Path of the Awakened Warriors.’ This is our ideal of a highly evolved warrior. It could be one and the same with an enlightened warrior; one whose training, battles, and life experiences has led him or her to a higher level of consciousness or awareness.

To me a warrior is not just constrained to the typical soldier who fights in battles, but can be a person who shows great courage and vigor in martial arts, athletics, business, or some other important cause or passion.

More importantly, through the disciplined mastery of his own body, mind and emotions a warrior has the potential to evolve into something more.

According to Carl Jung, an archetype is an inherited pattern of thought or symbolic image that is derived from the past collective experience of humanity and is present in the unconscious of the individual.

The warrior is just one of many common archetypes. Others are the teacher, the clown, the bully, the redeemer, the sage, the lover, the hero, the villain, the goddess, or one of many others.

“The Awakened Warrior is the blending of two archetypes: the WARRIOR and the SAGE (an enlightened person.) This self- actualized individual has the courage, determination and strength of the warrior, alongside the wisdom, detachment, and tranquility of the sage.”

As a warrior evolves and awakens to a heightened perception and understanding of himself and his ultimate reality… he transcends the state of mere warrior and becomes the warrior-sage.

He begins to see through the optical illusion of separation that divides humanity and acknowledges the literal oneness and totality of the universe.

He starts to recognize himself in the other and the other in himself… coming to the deeper realization that we all arise from the same source of consciousness. We all evolve out of the same nothingness to which we will inevitably return.

The layers of cultural conditioning and programming begin to dissolve and peel away… revealing the essence of who he truly is beyond form and time… beyond his body, mind and the limited identity or personality that he once thought of so strongly as himself.

He embarks upon a journey of growth and self-mastery… turning to the natural world for a deeper understanding of the evolutionary process and the collective principles that govern the universe.

Yet, he also balances his intuition with new insights from science, philosophy and technology.

He keeps his mind open and as clear as the blue sky, never clinging to one ideology and refuting another. He is constantly growing and evolving. He takes what is useful and valuable, adapts it to his own vision and philosophy and then discards the rest. 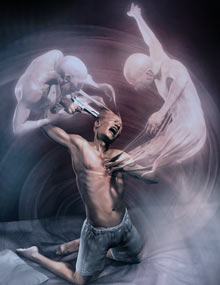 The external battle he once so vehemently fought becomes an internal one between his “ideal self” and his “shadow self”… with the ultimate goal of self-victory!

Can he master his thoughts, emotions and behaviors to unleash his ultimate potential in life OR will he be crushed by the enemy within – his fears, doubts and self-defeating mind?

Can he find true happiness through contentment and acceptance of the present moment while providing a valuable service to the world?

OR will his unending craving for more, only prolong his suffering, worry and resistance to what will become of his life?

Before, his overriding philosophy was the art of war… whereas now that he has awakened… it has become the art of peace.

His Awareness is the sword that he wields, cutting through fallacy and illusion wherever he may find it! This is the Awakened Warrior…

In Part II we will delve further into this metaphor of the Awakened Warrior and look at an example of such a warrior and how he lived his life.