“The connection to place, to the land, the wind, the sun, stars, the moon… it sounds romantic, but it’s true – the visceral experience of motion, of moving through time on some amazing machine – a few cars touch on it, but not too many compared to motorcycles. I always felt that any motorcycle journey was special.”– Antoine Predock 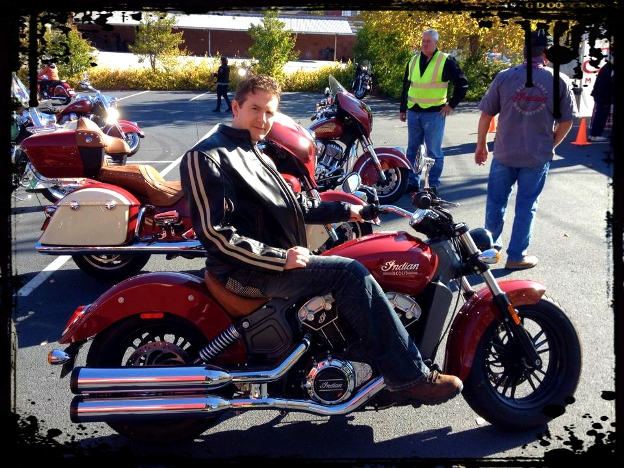 There’s nothing like firing up your bike on a warm, sunny day! Cruising down the back country roads under a Carolina blue sky, amongst the lush trees, farmlands and green pastures… it’s both an exhilarating and yet, mind centering experience.

You become fully present  as you seek to tame and control the mechanistic beast you’re riding. Your grip tightening as you accelerate into the rush and resistance of the wind.

The world of problems and mundanity forever behind you; Leaning into the corners and hearing the sound of the engine thundering out of the exhaust pipes as you roll onto the throttle… is all that matters now.

It’s AWESOME, broseph! And that’s why Cory and I jumped at the chance, when a good friend of ours invited us to go check out the Indian Demo ride in Greensboro, North Cackalacky.

I can’t wait to tell you all about it!!! However, before I do…. a brief motorcycle history lesson:

Before Harley Davidson… there was Indian! Say whaaaaat? 😉

“Indian is an American brand of motorcycles originally manufactured from 1901 to 1953 by a company in Springfield, Massachusetts. During the 1910s Indian became the largest manufacturer of motorcycles in the world. Indian’s most popular models were the Scout, made from 1920 to 1946, and the Chief, made from 1922 to 1953.” -Wikipedia 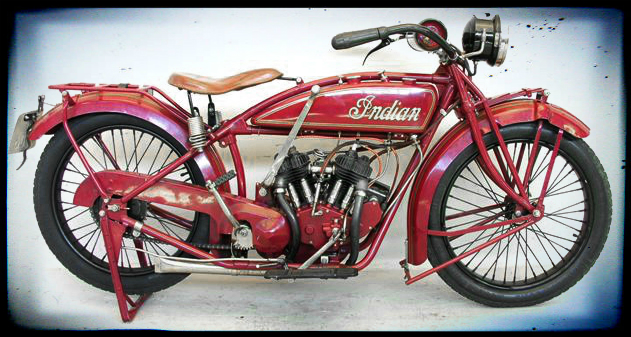 As the battle for American motorcycle dominance raged on… Harley Davidson, as we all know, emerged victorious and The Indian Motocycle Manufacturing Company went bankrupt in 1953.

A number of successor organizations have perpetuated the name in recent years, although with apparently limited success… that is until Polaris Industries took over in 2011 and revitalized the Indian name. 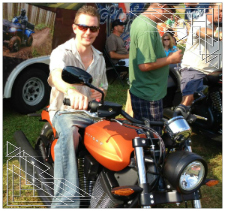 Me on the Vic Judge @ Carolina Wine Festival

As an aside, Polaris also makes the Victory line up of motorcycles and although I’ve only sat on a couple without actually riding them, I am a big fan of those as well. They seem like great bikes and I am especially fond of the Victory Vegas 8-Ball, Cross Country and the Judge.

Hopefully, Victory Motorcycles will have a demo ride in Greensboro in the near future and we can go ride their models as well.

Update: They did… you can check that out here. Okay, back to Indian.

Since Indian motorcycles have a vintage flair, rich history and helped pioneer what American motorcycling is today, it was pretty cool to get to test ride some of their new 2015 models.

Read on to see some pics of us on the bikes and to find out what we thought of the two Indian Models we rode. I’ve also included a short video of the all new 2015 Indian line up. So be sure to check that out. And to bring it all home, I found a great quote and a cool pic of Brad Pitt riding an old Indian Scout from the movie; ‘‘The Curious Case of Benjamin Button.”

Our Experience at the Indian Demo Ride 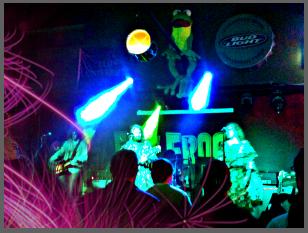 The night prior we were “cutting a rug down at a place called The Jugg with a girl named Linda Lue” … okay, not really, but that song is totally stuck in my head today!!!

Actually we were playing pool, drinking a few 1554’s from New Belgium Brewing Co. and listening to Jive Mother Mary at the Fat Frogg…. which is a bar & grill near Elon University campus.

After Midnight, Jive Mother Mary was jammin’ on some ZZ Top covers and their own classic rock inspired originals, when we realized we should probably dip out and head back to the house. We needed get some rest and be in good shape to ride those Indian Motorcycles the following afternoon.

We got there around 11:30am and as we were pulling in we saw about 20 bikes and their riders cruisin’ out to take ’em for a spin. The Indian dealership downtown had about 5 various models and over 20+ bikes from their 2015 line up for us to test ride.

Cruising around Greensboro on the All New Indian Scout 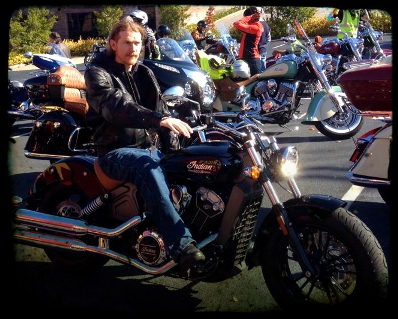 Cory getting ready to ride the black 2015 Indian Scout

For our first motorcycle ride we decided to go with the Indian Scout. The Scout is based on the iconic namesake of Indian’s original and most popular motorcycle.

Straddling the bike and testing its weight and balance revealed a surprising lightweight and nimble frame. The bike weighs in at 558lbs with a full tank of gas.

This bike would be perfect for someone of a smaller build and stature. I’m about 5’11” with longer legs, so although this would be an awesome bike for zipping around town or back roads… I could see myself getting uncomfortable on longer rides.

The source of power for the Scout is a 100 horse power V-twin engine with 69 cubic inches of displacement (1100cc)  and 72.2 foot pounds of raw torque. It is a liquid cooled engine with fuel injection and a belt drive… making it highly responsive. 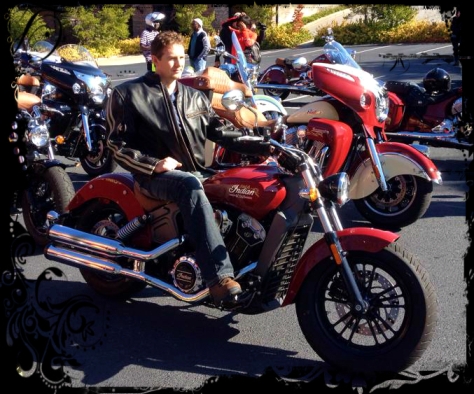 Being a lighter bike, the Scout had plenty of get up and go. I wish I would have been able to really open up the throttle to test its full acceleration. Still, I did get on it a few times and liked what it had to offer power wise.

I do think my V-Star 1300 has just as much, if not MORE power. Yet, since my bike has a slightly bigger engine that’s to be expected I guess.

My bike does weigh about 200lbs more than the Scout though, so it would be interesting to put them side by side for a drag race showdown!  Or for safety reasons, we could NOT DO THAT and just say we did. haha…

Okay, back to reality!

The reality is that the Scout was a fun bike to be taking out for a spin around town. When I gave it some gas, it would definitely take off… which is always a good thing. The lighter weight and frame of the bike seemed to make it more maneuverable.

One complaint we both had were the grips. We thought they seemed too small and thin in general. Grips can usually be swapped out easy enough, so that’s not a big deal.

However, I didn’t care for the gaudy radiator up front. Call it a personal preference of mine, I never really cared for the look of a big radiator on a motorcycle. I do like to have a liquid cooled engine though, so it would be nice to see a smaller, more aesthetic looking radiator.

All in all, the 2015 Indian Scout is a fine piece of craftsmanship and the most affordable bike in the Indian line up starting at $10,999. If you’re looking for your first motorcycle, this could be a contender. Although, I recommend taking the MSF Course and practicing on their 250’s first!

Rolling Down the Streets in Luxury on the Indian Roadmaster 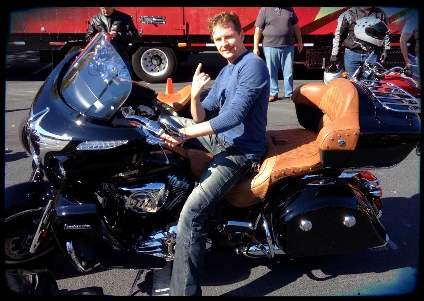 Here I am enjoying the American Luxury of the Roadmaster

For our second run, we both decided to jump on the biggest, most luxurious touring bike Indian had to offer… the Roadmaster.

Neither Cory, nor I, have done a lot of touring on a motorcycle at this point. The longest ride so far was our trip last year to the Blue Ridge Parkway.

This overnight trip took 2+ hours to get there, several hours riding around the parkway and mountains and then 2+ hours to get back. Definitely not cross country or anything.

Still, the road took it’s toll on us, especially since we rode without any wind protection such as a windshield or fairing. If we would have had a touring bike such as the Indian Roadmaster, things would have been a lot more…. comfortable!

The first thing I noticed upon hopping on the Roadmaster was the plush, desert tan leather seats. Not only did they look really nice, they were also soft and cushiony on the ol’ buttox. Both the driver and the passenger seats felt comfortable enough to withstand some serious mileage.

When I went to fire this bad boy up, I was a little confused because I couldn’t find a key to turn it on. One of the Indian reps standing nearby pointed out that it had a secure keyless ignition system and all I had to do was press that button. I did and the Roadmaster fired right up! Sweet!

It had no problem keeping up with the Indian Scout, as I followed behind a few of them on this smooth second ride. For a bike weighing in at over 900lbs it was surprisingly easy to balance and control.

The Roadmaster has plenty of features such as a radio, electronically adjustable windshield, heated grips and seats and an ample amount of storage space to hold and secure your gear and luggage.

Neither of us had any complaints about the Roadmaster’s feel and functionality. The only thing for me is that I don’t particularly like how it looks.

The Indian Roadmaster’s starting price is around $26,999. If I was going to drop that kind of cash I would want to ride the Victory Cross Country Tour, Harley Davidson Electra Glide and the new Honda Goldwing before making any commitment to the Roadmaster.

Personally, I love the sleek modern style of the Victory Cross Country over the vintage-inspired vogue of the Roadmaster. But hey, that’s just me and everyone has their own tastes in motorcycles! 🙂 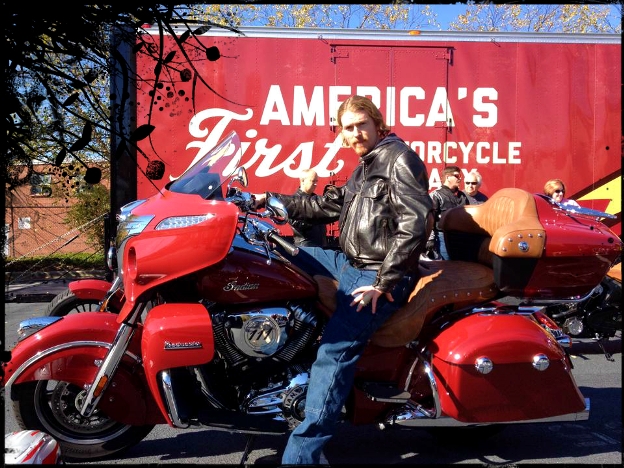 Cory captivating the very essence of the Indian Roadmaster

The All New 2015 Indian Motorcycle Line-up

During the demo ride we only rode two of the five models Indian has to offer. It was a great way to spend the afternoon and we definitely enjoyed the hospitality and chance to test ride these bikes. If you have an Indian dealership nearby, look them up to see if you can participate in one of these demo rides.

To wrap up this post and in the spirit of Unleashing Your Ultimate Potential, I’d like to leave you with this inspirational quote taken from the movie, “The Curious Case of Benjamin Button.”

In this film there’s a short scene where Brad Pitt (Benjamin Button) finds an Indian Scout and takes it out for a joy ride. This is the same Indian Scout from the 1920’s that is pictured at the beginning of this blog post. 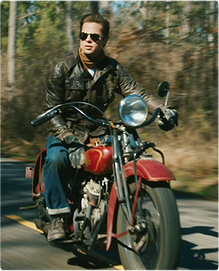 “For what it’s worth: it’s never too late or, in my case, too early to be whoever you want to be. There’s no time limit, stop whenever you want. You can change or stay the same, there are no rules to this thing.

I hope you feel things you never felt before. I hope you meet people with a different point of view. I hope you live a life you’re proud of. If you find that you’re not, I hope you have the strength to start all over again.” – Benjamin Button

Hope you enjoyed this review of our experience and learned a little something about American First Motorcycle Company in the process. Thanks for reading!